Fuzzy wonderment about “true indigenous wisdom” lingered after Thanksgiving. Those thoughts mashed with circular economy concepts triggered by a Black Friday announcement from Ikea about a program to buy back furniture to recycle or resell as a step toward being a more sustainable company.

At the time, I had a couple pieces of furniture that I was planning to get rid of and replace with space efficient alternatives, but with these concepts in mind, I decided to see if I could turn what I had into what I needed. My goal was to use as many pieces as possible with as little waste as possible. The pieces of furniture that I had were a square side table and a loveseat. The table would stick out and seem to be in the way any place I moved it, and the loveseat was uncomfortable and left two people sitting on it playing that awkward elbow game you may be familiar with if you have flown economy.

What I needed was a bookshelf, a shoe rack, and a smaller table. I had scrolled through Google searches and Amazon options, but dimensions and designs weren’t quite what I had in mind for the space I had to work with.

Initially, I looked for access to a community woodshop, but they don’t seem to exist—plus Covid. After daydreaming about what a community maker space could be like, I found what tools I had and came up with a plan.

Breaking something with the intent to reuse the pieces requires a different mindset than a smash-it approach. I had to remove hardware—like screws—and figure out how it was being held together and the right location to apply enough force to disassemble it. It took an hour or two, and most of it came apart as expected. Although a couple of pieces broke in slightly odd ways due to a very strong wood glue.

Once all the pieces were apart, I had to reshape many of them in order to rebuild—meaning a lot of sawing and sanding. I only had a hand saw, sand paper, and a level—so this took a while. Sawing straight by hand is tricky. You have to make sure your board is an even width, that you draw a straight line, that you account for the blade width and where you are going to saw on the line (middle, to the right, etc), and that you keep the blade straight as your arm gets tired and your perspective is impacted by parallax. Basically, if you hand-saw, don’t expect machining precision—unless you are a master carpenter.

I started with the table. The objectives were to adjust the size, make it so the grill would fit underneath, and elevate the plants to get a little more sun. I didn’t account for the deck not being completely flat or the possibility that the legs may not be 100% wood, but regardless, the objectives were achieved. 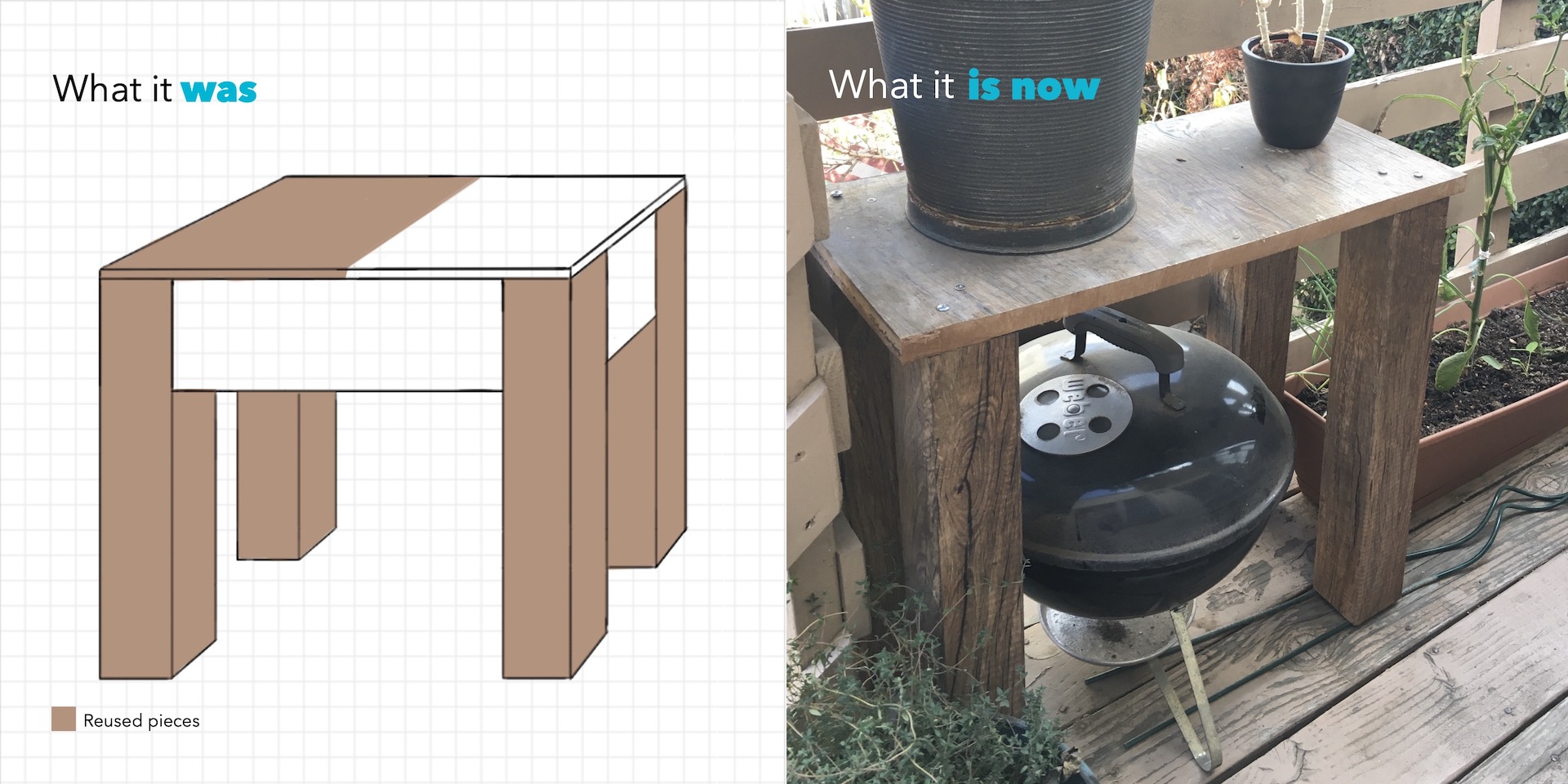 Next was the shoe rack. The objective was an organized place for all shoes to limit the quantity as well as clearly indicate that shoes come off at the door. I assembled it using melding plates rather than dowels or screwing two pieces of wood together. This took more hardware than the table and bookshelf, but it turned out very sturdy with fairly thin legs. 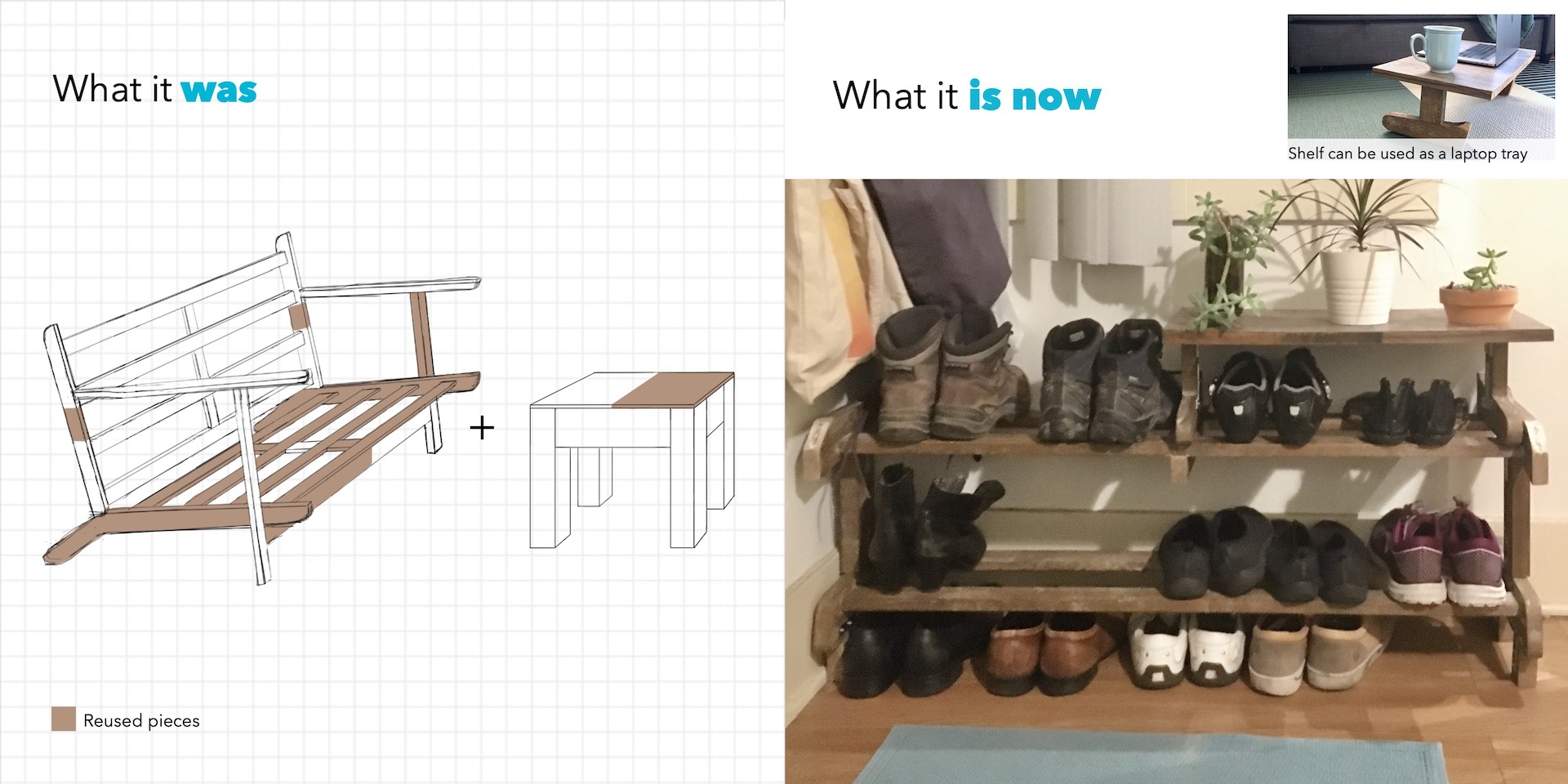 Last to be assembled was the bookshelf. The objective was to have a place for books to keep them accessible and organized—but after adding the light, I decided to use the first shelf for other things. I used finishing nails on the shelves and inset screws on the top in order to keep it flat—instead of little screw heads popping up. 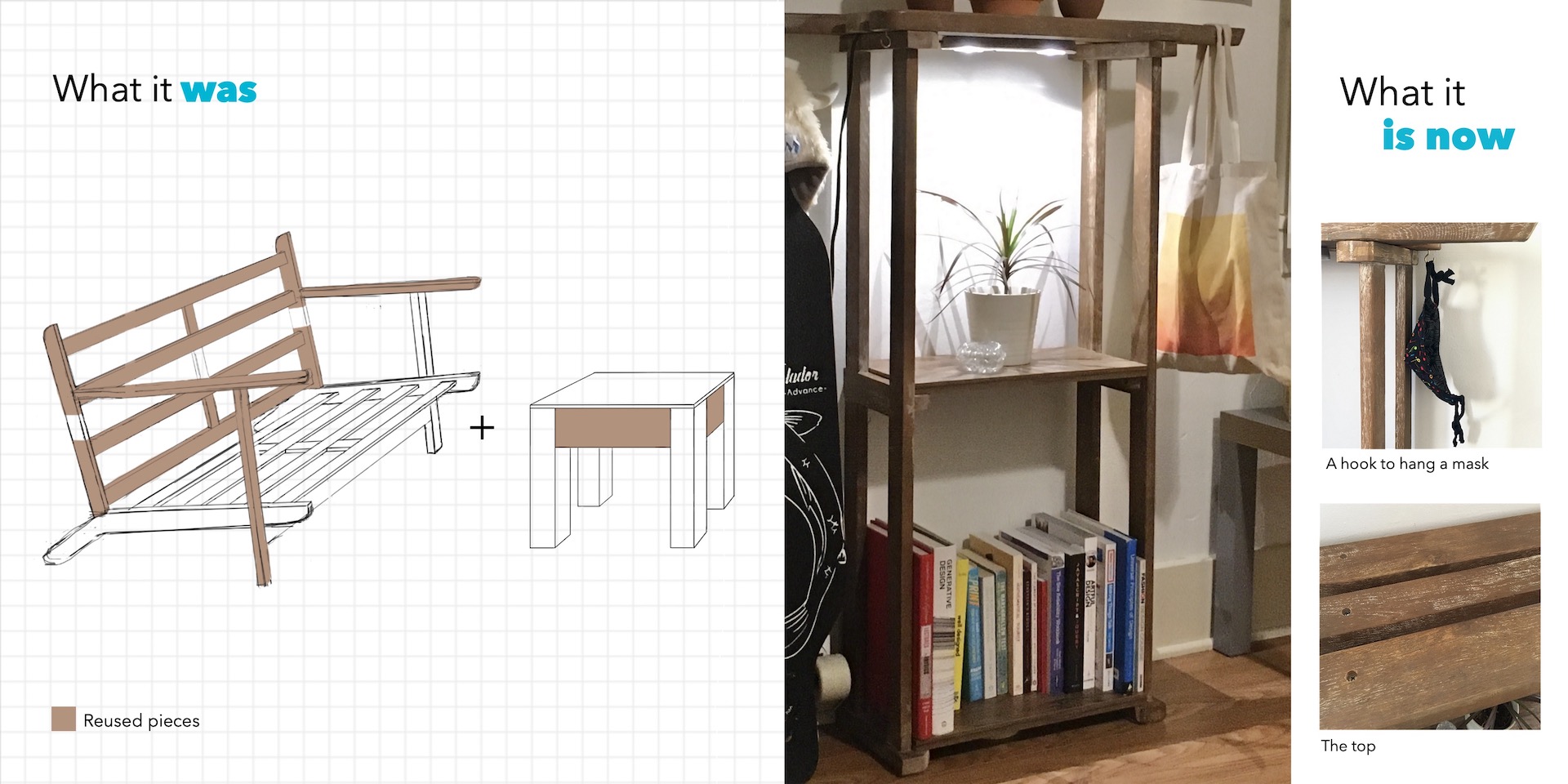 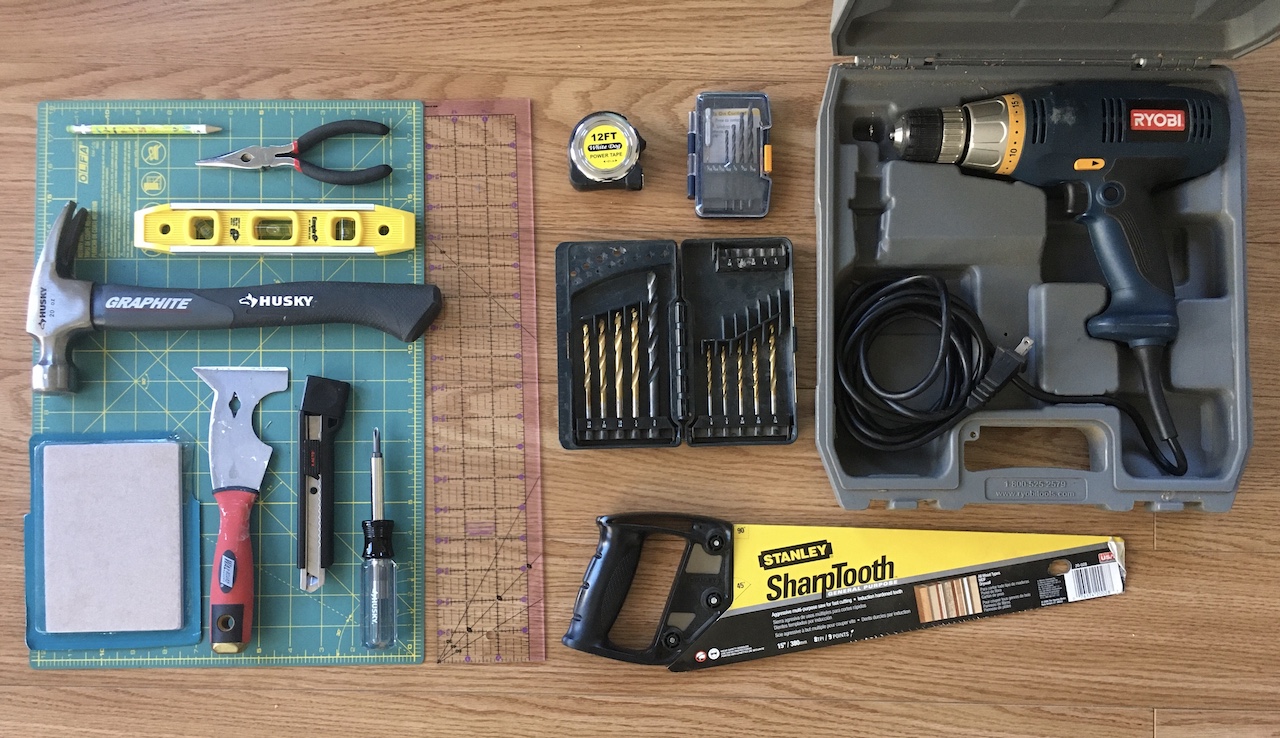 If you are using a handsaw, to save time, build on the sides of the wood that have been planed—meaning they will be level and smooth (an example is pictured right), instead of the sides where you made cuts (pictured left). Then you don’t have to take extra time to precision sand and level. 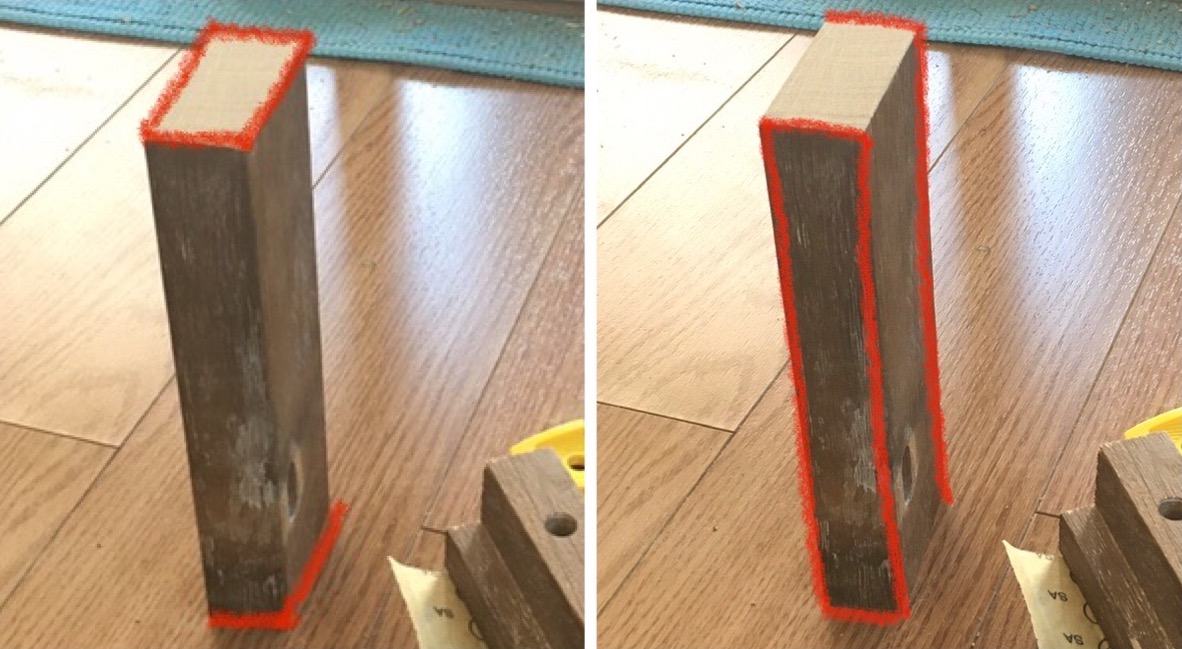 For anyone new to drills, drill bits remove a cylinder of wood from a board to make room for a screw—or another piece of hardware. At first, I was using a bit that was too small for the screws that I had, which resulted in stripping screws—which basically means that you lose the ability to loosen or tighten the screw because the head, aka top, of the screw is destroyed. Ideally if you want to build with reuse in mind, this becomes a future problem. I learned this trick that helped me pick the correct bit size. If you hold up the bit in front of the screw, and can still see the threads, but not the shank (pictured right), then it should be a good fit. By adjusting the bit size that I was using, screws went in much cleaner. 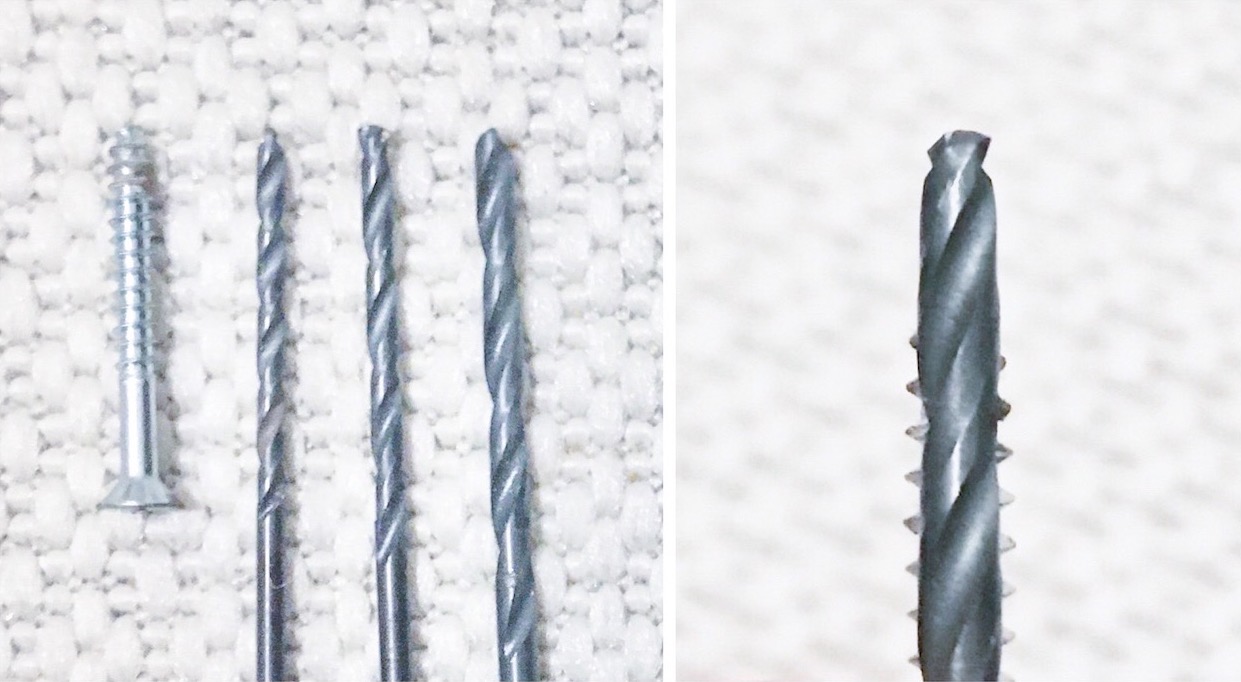 If you don’t want to switch between a drill bit and a phillips screwdriver after every hole drilled, you can use a nail to make sure the holes remain aligned while you drill another hole. It is also a great way to check the depth of a drilled hole. 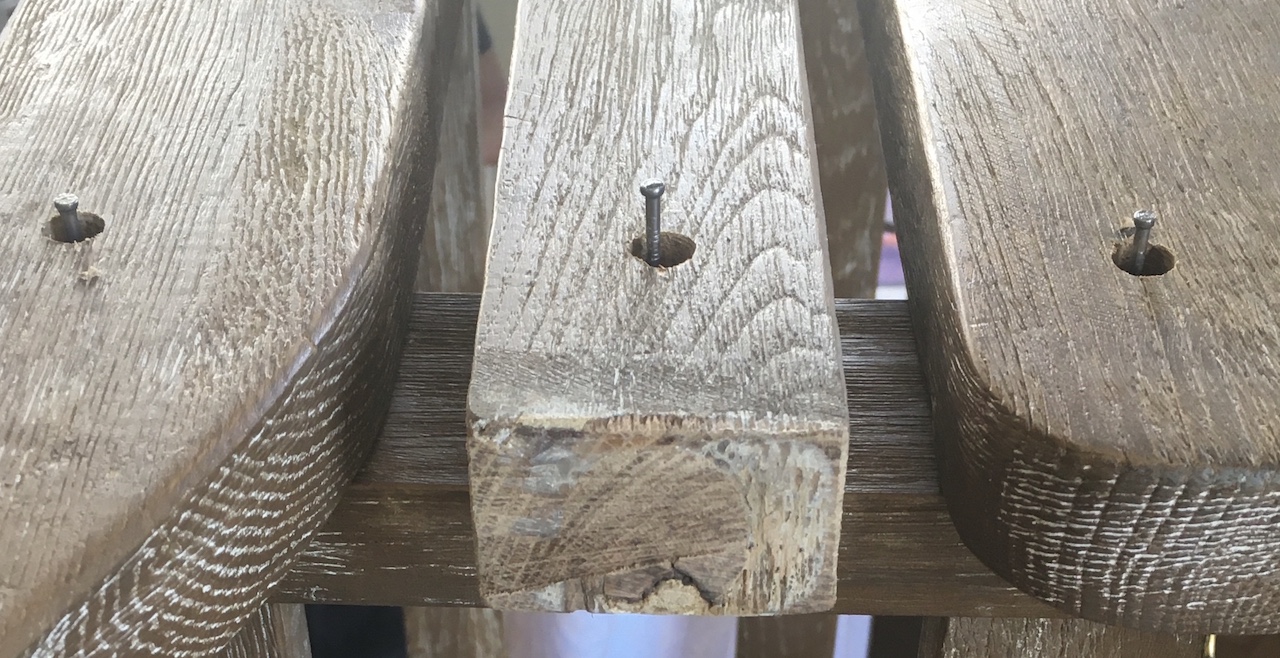 Adding felt pads or furniture glides to the bottom of furniture is a nice touch. I reused what I pulled off the table and loveseat and bought felt pads. Next time instead of buying felt pads, I’ll probably use old material.

I still have a few pieces left that I will find a use for. As much as I wish I could say that doing this prevented a tree from being felled because I didn’t purchase something new, I’m not naive enough to believe that. Resources aren’t harvested on a need basis. That wouldn’t be considered cheap, timely, or convenient—which seem to be the majority of society’s guiding principles. Even though I can’t claim this made an environmental impact, from a values perspective, it feels good to more closely align my actions to what I believe.